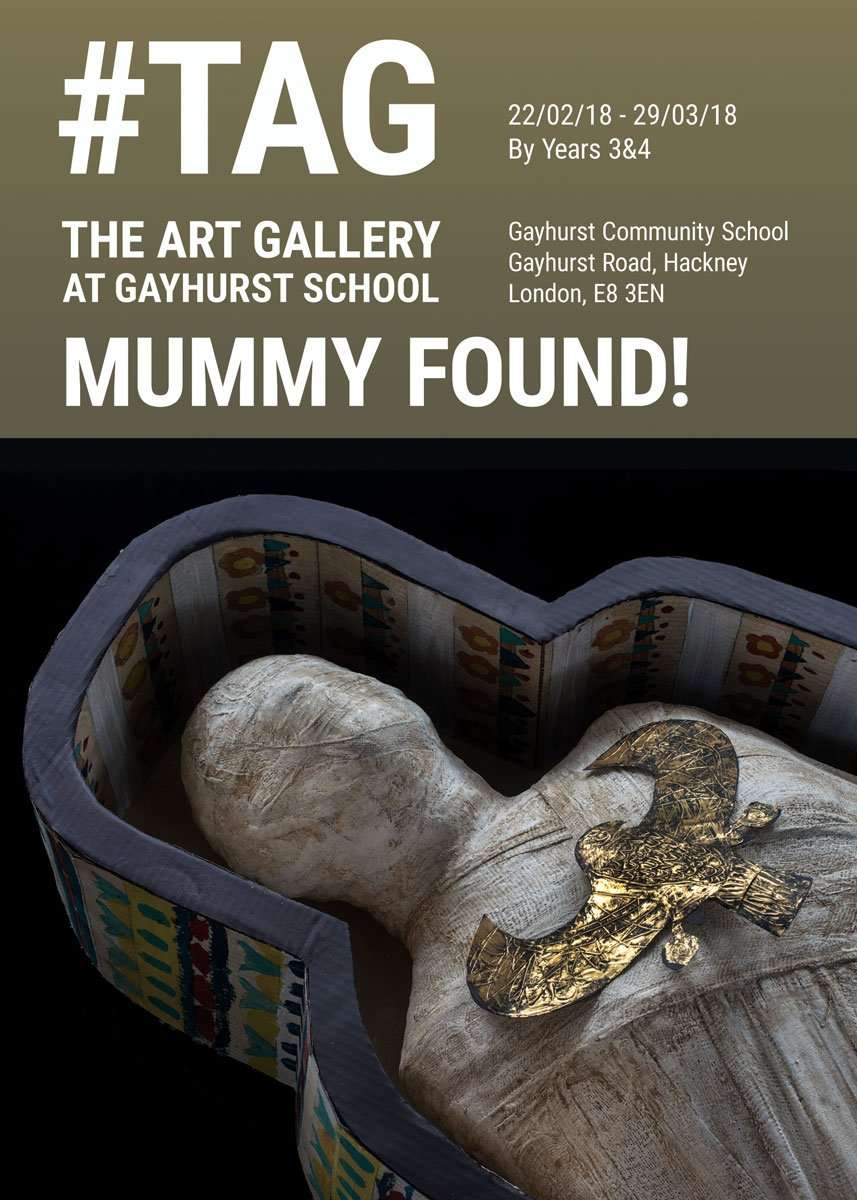 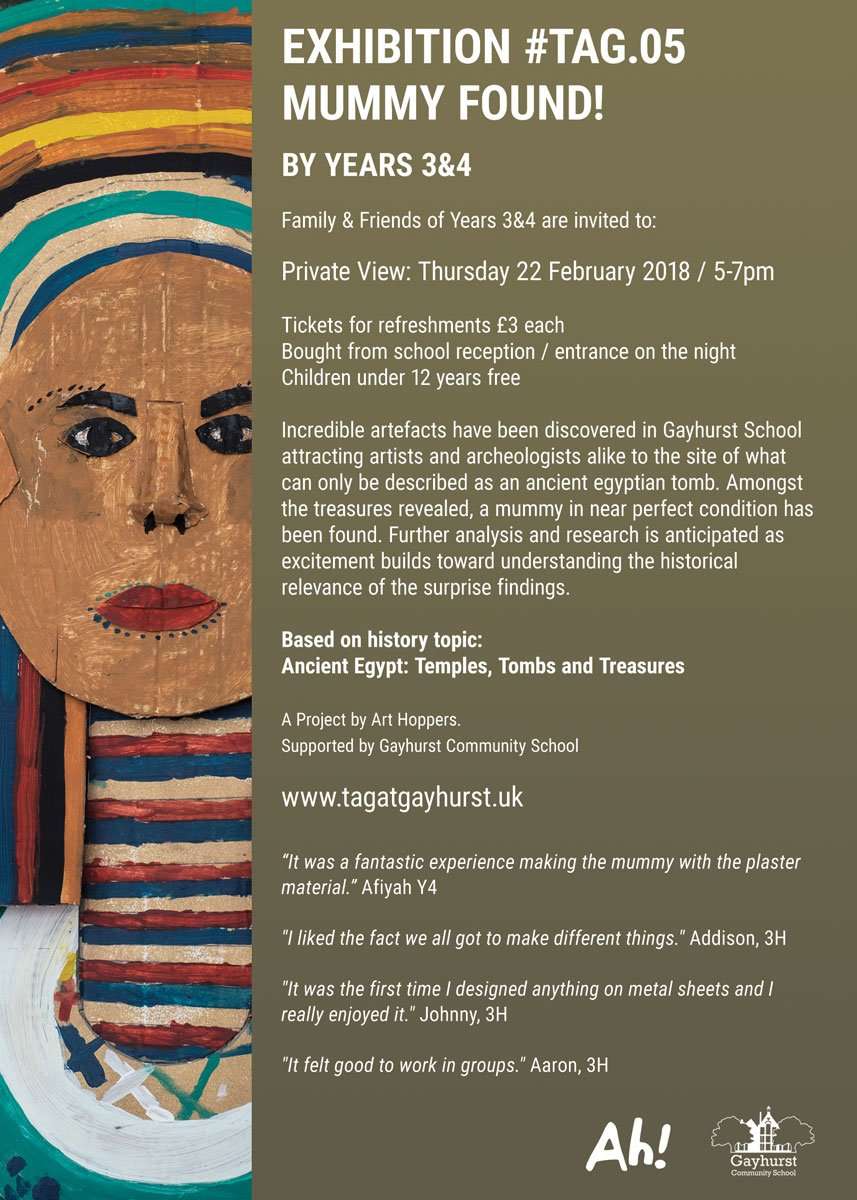 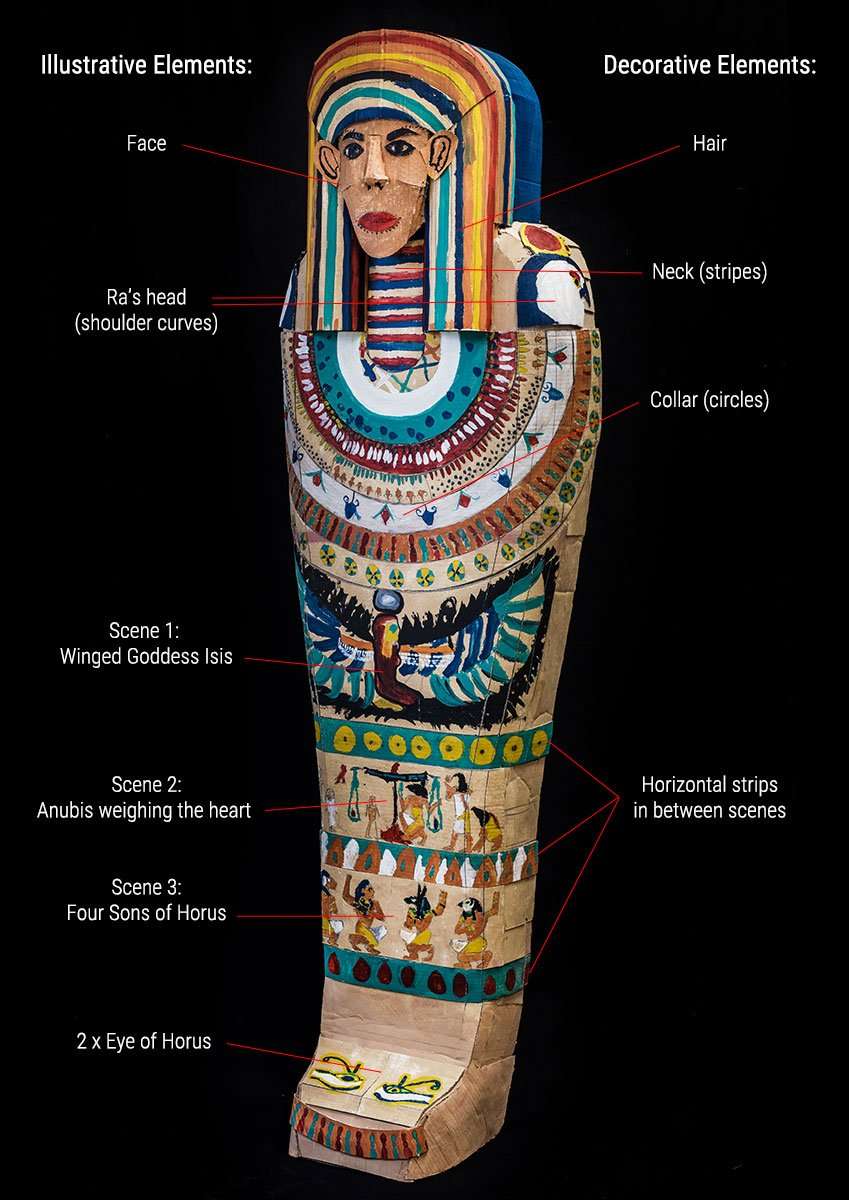 Incredible artefacts have been discovered in Gayhurst School attracting artists and archaeologists alike to the site of what can only be described as an ancient Egyptian tomb. Amongst the treasures revealed, a mummy in near perfect condition has been found. Further analysis and research are anticipated as excitement builds toward understanding the historical relevance of the surprise findings.

Explore this archaeological site! Puzzle together precious artefacts and preserve them for future generations. Crack the code to the tomb and obtain a close-up view of the interior. Find clues to discover more about the mummy and the life of the Ancient Egyptians.

‘MUMMY FOUND!’ is designed as an immersive art installation presenting children’s artworks from years 3 & 4 at Gayhurst Primary School as historical artefacts within the context of a recently discovered archaeological site surrounding an ancient Egyptian tomb.

The exhibition brings learning to life… A series of half day art workshops were delivered by Art Hoppers in response to the curriculum and through a collaborative working relationship with teaching staff. The project aims to enhance children’s understanding of their topic ‘Ancient Egypt – Temples Tombs and Treasures’.

Items found in the hidden tomb include a life size, adult mummy of a yet unidentified female believed to be a noble woman of the past. Additional funerary items include a sarcophagus, canopic jars, tomb paintings plus treasures of gold jewellery and beading which each play an important role in the unravelling of who and when the tomb belongs. These items would have served as powerful, symbolic tools with a duty to protect and guide the deceased in their journey through the afterlife.

During the art sessions, different creative techniques were applied in the making of the artefacts. Materials such as plaster of Paris or Modroc were used to create the mummy and canopic jars. Plaster engravings of the Sun God Ra, Osiris, Anubis and Horus sit alongside Goddess Isis, Nut and Bastet, emulating the sunk relief stone carvings found in tombs and on temples.

A traditional painting technique using egg tempera was applied in the design of tomb paintings. The pastoral scenes depicting the harvest, fishing and feasting show the importance of the River Nile and ensure the mummy could magically make real the offerings of food and enjoy eternal nourishment and wellbeing.

Golden treasures crafted from embossing foils show the wealth and beauty of the ancient Egyptians through ornately designed jewellery pieces. These, worn as amulets to protect and empower the wearer were considered of great value through the symbolic meanings of the imagery incorporated or the precious gemstones embedded. Beads made from natural minerals would have been worn for their protective and magical qualities. 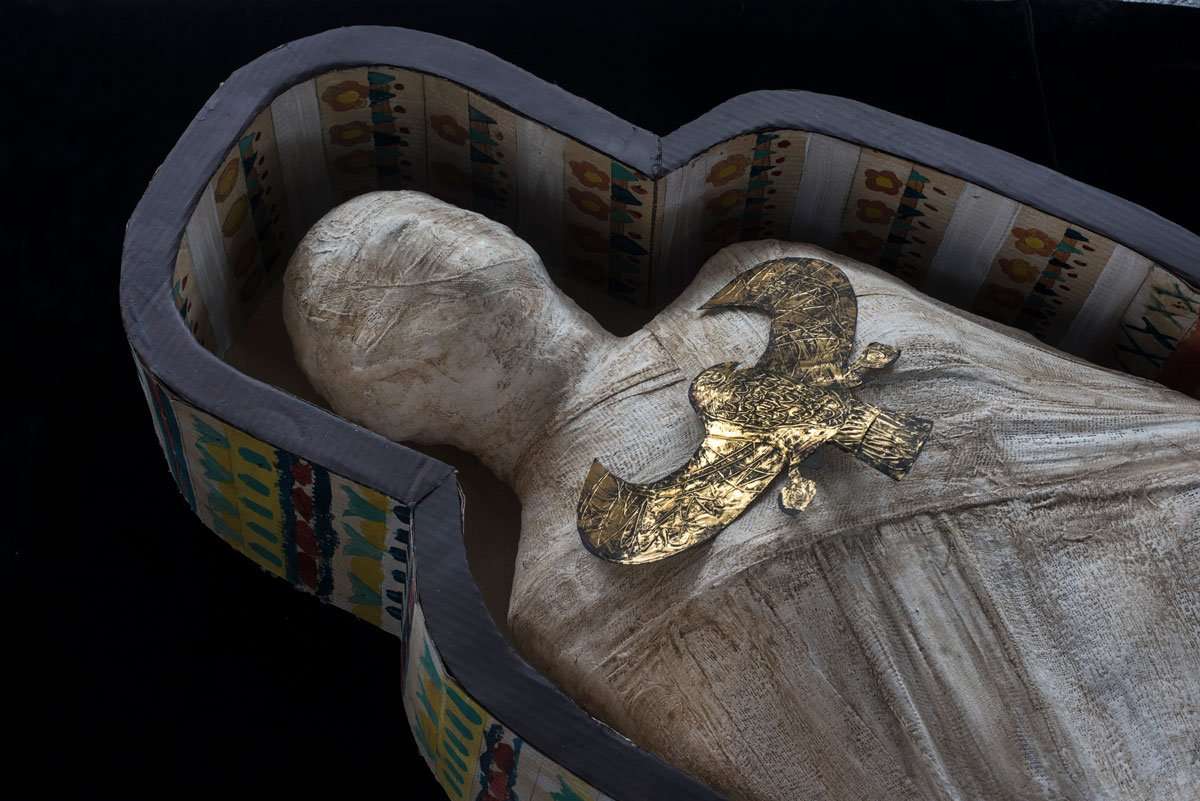 “It was a fantastic experience making the mummy with the plaster material.”

“I liked the fact we all got to make different things.”

“It was the first time I designed anything on metal sheets and I really enjoyed it.”

“It felt good to work in groups.” 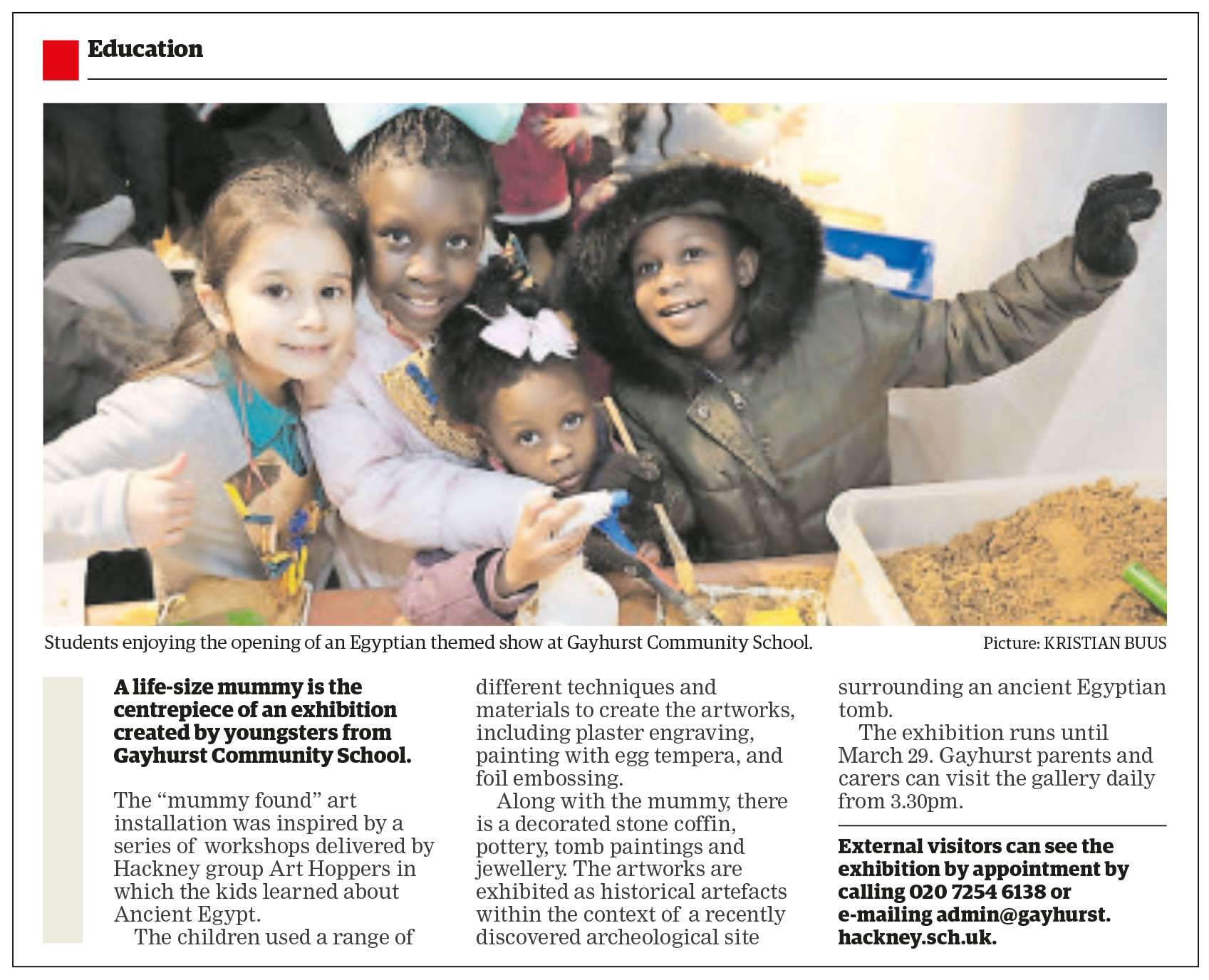 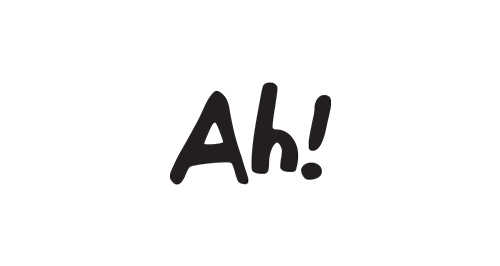 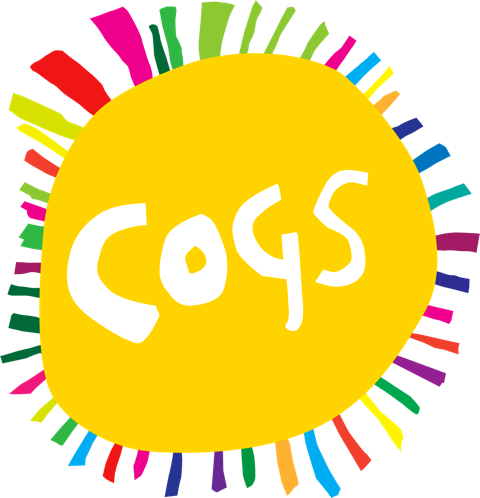 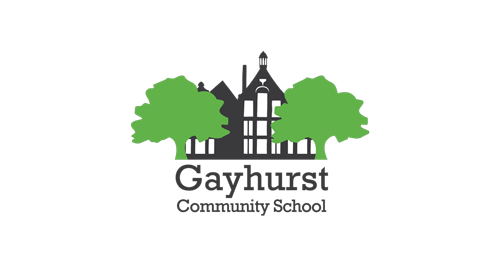